Let me start by saying that for years, I had sworn that I would never take a cruise. Never. I didn’t want to be stuck on a ship in the middle of the ocean with no way to get off and with nothing to do. Yes, I know cruises supposedly have loads to do, but when people would list the activities onboard cruises, I wasn’t impressed. I don’t like to swim, to lay in the sun, to gamble, to go to a spa, to go clubbing and there is only so much time one can spend eating.

So when I announced to Dan that I wanted to go on a Disney cruise for our 12th anniversary, he asked “Who are you and what have you done with my wife?”

There were 2 main reasons I changed my mind: babysitting and trust.

Dan and I have been away from Elly for a total of 6 hours since her birth 2 years ago. 4 of those hours were used to attend a funeral. Clearly, we could use some time alone. Yet, I wasn’t willing to leave Elly for any length of time. The Disney cruise ships offered the best of both worlds; we could have adult time, Elly could play with other children her age in Disney’s nursery and we could reconnect as a family in a few short hours for fun together. It sounded perfect.

The other reason was based on our previous vacations to Walt Disney World. I have grown to trust Disney. Any company that can make standing in line fun should be able to make a memorable cruise.

The first day was spent checking in – a quick and easy process, napping, dropping Elly off at the nursery (after which I cried – so not ready for preschool) and enjoying a romantic dinner with Dan at Palo, an exclusive adult restaurant. In a word, wonderful. 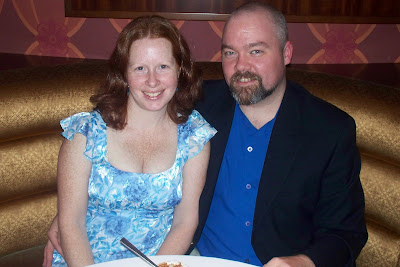 The next day, the ship docked at Nassau in the Bahamas. We had booked seats on the semi-submarine tour months in advance. 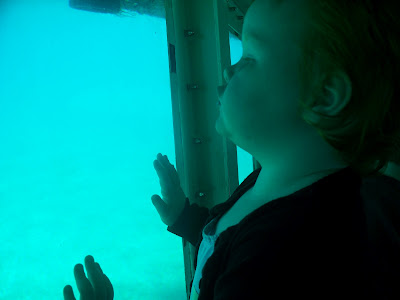 Though Elly was excited to see so many fish, she did not love the loud noise that the engine made. She also wasn’t a fan of the “central air conditioning”, salt water air whipping into her face, or the cramped quarters. She spent a good portion of the excursion comfort nursing, fussing and looking for an escape route. Elly was happiest when we were off the boat and she could once again run free.

Exhausted and hungry, we headed back to the cruise ship for a quick lunch and a long nap. Shortly after waking up, it was time to head to dinner. We were seated with a lovely family from Virginia. The food was delicious. The environment was fun thanks to Crush, sea turtle in Finding Nemo. The problem was the duration of the meal. We had recently patted each others’ backs for training Elly to remain at the dining table until Dan and I had finished eating supper. We even thought she was ready to start taking to restaurants. We got a rude awakening on the cruise. Elly’s limit is about hour. The dinners on the cruise lasted upwards of 90 minutes. We bailed early on the first night. It took a smart phone equipped with toddler puzzles and a tablet playing Wall-E to get her to dessert on the final night. 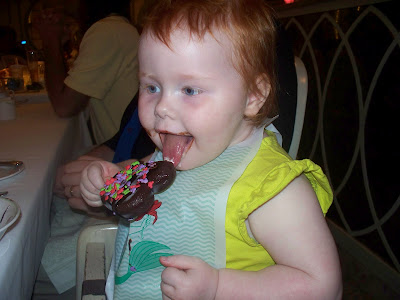 By bedtime, doubts were swirling in my head. Had I made a mistake by choosing a cruise for our vacation? Would Elly be able to play with other children and have fun outside of the nursery? Would Dan and I find time to relax and just hang out?

Thankfully, the answer to those 3 questions were no, yes and yes.

Once we started paying attention to the activity list for each day, it was easy to keep Elly happily busy.
Nemo’s Reef, a splash park, was a big hit. 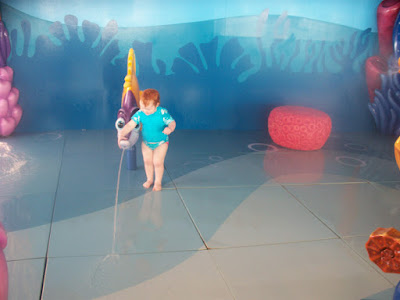 Andy’s room in the Oceaneer’s Club was also a big hit. 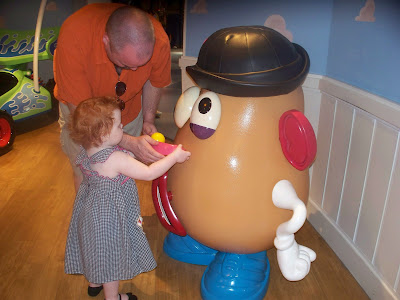 (Note that Elly was only allowed in the Oceaneer’s Club during Open House hours since she was under 3 and still not potty trained).

Surprisingly, Elly loved seeing all the characters. She would run right up to them and hug them. 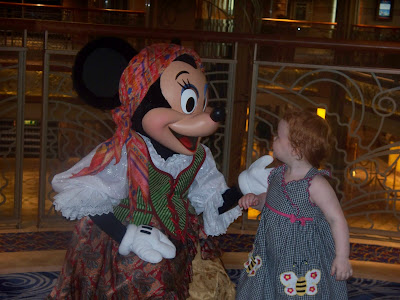 Surprisingly because this is the same girl who screamed when I tried to get her to sit on Santa’s lap.

Thanks to music being played everywhere, Elly had lots of opportunities to show off her dancing skills.
She danced by herself. 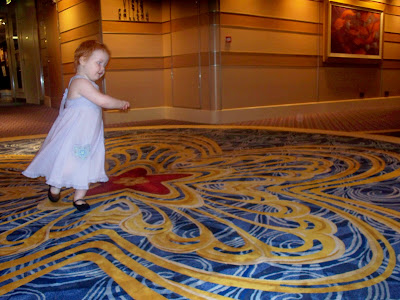 She danced with Daisy Duck. 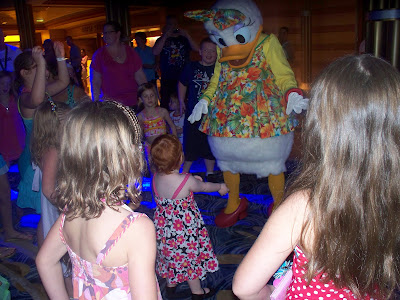 She even coerced other people to dance with her. 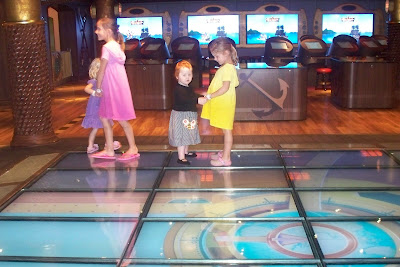 To ensure that we adults had a good time as well, I insisted that we not get off the ship again despite being docked at Castaway Cay, Disney’s private island filled with fun activities, the very next day. I needed nice, quiet days with no comfort nursing, no fussing and no 2-year-old-tantrums. Nice and quiet. This cruise was booked as a romantic cruise for Dan and I. By going at our pace and just participating in the events and dinners that we wanted to do, it became just that.

On the 4th day, Elly headed back to the onboard nursery. This time, she cried and I (barely) held it together. Dan and I got our romantic time away from Elly. 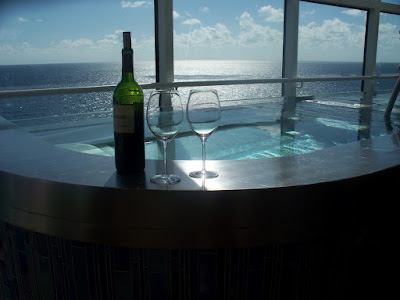 In all, it was lovely. It really was.

Yet, we learned that we are not cruisers. We will probably never take another one. The strict schedule (when to eat, when to play, and when to depart the ship), the casual dress code and the constant service was a bit too claustrophobic. We are very laid back people. We don’t like being fussed over. Not so say that our servers weren’t amazing and fun, because they were. 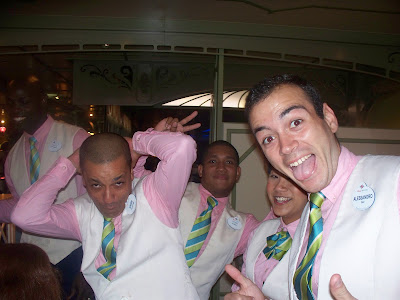 Additionally, I didn’t walk off the ship feeling like I had missed anything, despite not seeing 1 show or setting foot in the spa or the gym.

Our best vacation to date remains the one we took to Clearwater, FL to watch the Phillies in Spring Training. We did absolutely nothing except eat, watch a baseball game everyday and check out neighborhood bars. We never set foot on the beach. It was relaxing, fun and amazing. When Elly is a bit older (and willing to sit through a baseball game), we’ll go back.

Full album of the Disney cruise can be viewed here.