5 years ago when I researched how to remove poison ivy without chemicals, I came across 2 recommendations.

Since the poison ivy was wound tightly around a section of the hedges, the odds of me being able to locate the entire root system in amidst the roots to the hedges were slim at best. So, option 1 was out.

Option 2 was ruled out because of our location. The Borough of Pottstown does not allow its residents to keep a goat as a pet. It’s for the best. Not only would a goat eat the poison ivy, it would eat everything else in sight. Perhaps the only shrub a goat would steer clear of is my Firethorn bush; the 4-inch-long thorns are wicked.

Thus, 5 years ago, I bought the strongest chemical I could find and sprayed the heck out of it. Yes, I lost a section of the hedges, but I killed the poison ivy. I had won.

This year, I had broken out in a rash on my arms and feet several times from poison ivy. I assumed it was because my neighbor had the ivy intertwined among his prized raspberry bushes. 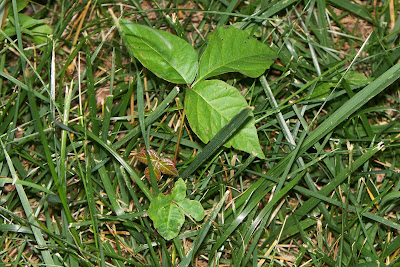 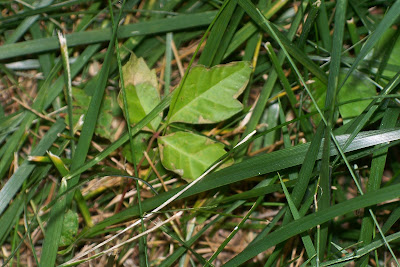 I bought Round Up for poison ivy from Lowes and sprayed any plant that had leaves of 3. I probably sprayed over 20 plants. I wasn’t quick enough though. Poor Elly broke out in a rash on Saturday. Thankfully, it was only on her ankles.

Despite spraying with chemicals, the poison ivy still thrives. Maybe I could borrow a goat and corral him to the area underneath my pin oak tree.