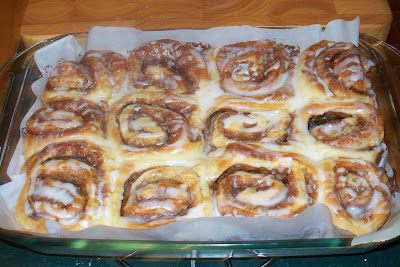 Though it’s hard to beat the convenience of Pillsbury cinnamon rolls, they don’t hold a candle to the homemade version.

I used this recipe for the rolls and filling. The icing is nothing more than powdered sugar mixed with milk and a splash of vanilla extract.

I didn’t make any changes to the list of ingredients outside of swapping  butter for margarine, but I did make the following changes to the instructions.  After sprinkling the filling over the butter, I gently pressed the sugar and cinnamon into the butter to keep it from falling out during the slicing process. Rather than cook the rolls right away, I let them rise a 2nd time, partly because I believe yeast bread should almost always be allowed to rise twice in order to achieve a light and airy texture and partly because Elly was whining for a nap. Lastly, I grabbed parchment paper rather than Pam spray. Parchment paper makes clean-up a breeze. Gosh how I love the stuff.

One thought on “What We’re Having for Breakfast This Week”